The Michigan Department of Transportation’s 34th Annual DBE and Small Business Conference was in full-swing from March 31 – April 1, 2014, at the Marriott Hotel, in Pontiac, Michigan.  Day One opened with remarks from MDOT’s leadership, focusing on the warming business climate in the State, and how to effectively do business with MDOT. 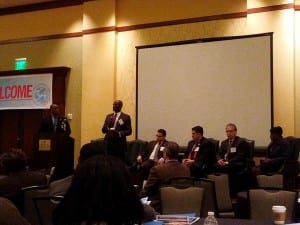 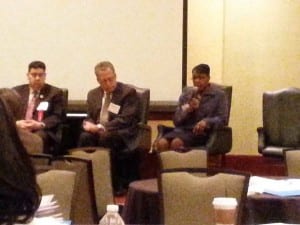 Kim Avery, MDOT Metro Region, said she wants to make
sure DBE’s have access to the people and services they need.

Day Two of the conference featured a keynote address by Sundra Ryce, president and CEO of SLR Contracting & Service Company, Inc. who advised fellow DBEs not to worry about being taken advantage of, but to evaluate the long range potential of projects. She did and ended up being part of a billion dollar development in Buffalo, NY. 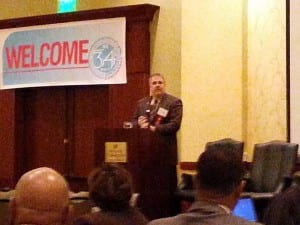 Russell Jorgenson of the Federal Highway Administration of Michigan, said, “We want to reach 9% DBE contract participation this year.”

The Conference Vendor Fair offered small businesses opportunities to discuss their products and services and how to work with other small firms  to achieve long term business objectives. An informal networking reception followed the Vendor Fair.

The conference ended with a Transit Summit that encouraged participants to imagine the future of the transportation industry, how working collaboratively can achieve these goals, and project requirements around the State.

The Forbes article “The Jobs of the Future Don’t Require a College Degree,” by Pascal-Emmanuel, emphasizes the importance of apprenticeships and how they can prepare people for the future job market. Using data from the Bureau of Labor Statistics, Pascal-Emmanuel points out that skilled labor jobs are some of the fastest growing jobs of the future. For example, according to the Bureau of Labor Statistics, mechanical, insulation workers, personal and home health care aides, and brick masons and electrical helpers are just some of the occupations that are currently in high demand. Every day, apprenticeship opportunities are becoming more available, making the idea of “everyone needs college to be successful” sound more like a grand pronouncement rather than the actual truth.

This article is an interesting take on apprenticeships. The truth is, whether someone decides to either go to college or to enroll in an apprenticeship program, that person will find comfort in knowing that they have options and that they can make contributions to the world in more ways than one. 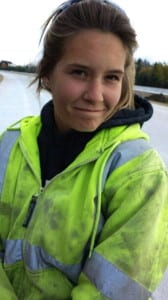 By Donald O’Connell
Apprenticeships offer pathways to successful careers that provide family-sustaining wages and benefits.  This is the reason Kaitlin Hoetger decided to become an apprentice Operating Engineer.

The Operations Manager of Ajax Paving Industries, Inc., Leo Remijan, noted that “In 2008, Ajax contacted the Operating Engineers for potential applicants for the MDOT On-the-Job Training Program.  Kaitlin was referred to Ajax at that time.  She has proven to be a dedicated hard worker, dependable, knowledgeable, willing and able to work as a valuable team member to get the job done.  Kaitlin has earned the respect and trust of her other crew members.”  He further notes, “Kaitlin is one of our talented young operators who will be the future of the company for many years to come.”

Mark Zinser, Education and Training Instructor, Operating Engineers Local 324 JATF, Inc. mentioned that Kaitlin strives to be the best operator she can be.  Mark noted, “She would not settle for just a passing score on her equipment proficiency test, she wanted the best score.”  He also said, “She went above and beyond her requirements for graduation by taking extra classes so that she was a well-rounded operator.”

Kaitlin sustains her successful career as an operating engineer while also raising a family.  In early 2012, she took a maternity leave to become a mother.  Safety Director of Ajax, Joseph Landino, stated that “Upon returning to work, not missing a beat, she picked up right where she left off.”For all of these reasons, Kaitlin was honored by the Associated General Contractors of Michigan as the Operating Engineer Apprentice of the Year at their February 14, 2014 annual meeting.

Kaitlin posted to the Operating Engineers Local 324’s Facebook page, “Thank you everyone!  The recognition is very much appreciated.  I’m proud to be a member of Local 324.”

Congratulations Kaitlin, you make us all very proud. 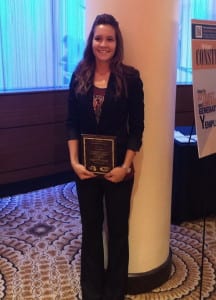 Apprenticeships are good programs, if you can find them, and this website is full of new information about scores of opportunities in the skilled trades. Many people see the skilled trades as new ways to earn while you learn. Others are going after apprenticeship programs in skilled trades to get into construction jobs that don’t require college degrees and where they can earn substantial dollars to support their families.  Both scenarios are true.

MiRoad2Work.org is comprised of several people who are in the construction field, in one capacity or another. We understand that while jobs in construction declined significantly during the recession, new opportunities in construction are now on the upswing. This is true in Michigan too as construction on the I-96 corridor and the M1 Rail kicks off. A lot of people have retired in the skilled trades industries, and they need to be replaced. Employers are looking for people who are good with their hands and good at learning new skills.

While you may not need a college degree to get into an apprenticeship, many programs require you to pass several tests to qualify for them.  Don’t be dismayed. There are several programs that can prepare you to get ready for apprenticeships. We call them apprenticeship readiness programs.

We can help with:

·       Supportive services such as transportation and child care assistance

So, do not delay a moment longer. Find out how you can become an apprentice and eventually, a skilled tradesman. These opportunities are open to both men and women, too!

Apprenticeship programs in the skilled trades are another path to reach your life-long career goals.  Most apprenticeship programs last from three-to-four years. Within that time period, you can get hands-on training while earning a sustainable wage. Yes, you get to earn while you learn, and gain the necessary skills for a meaningful career!

Don O’Connell, Director of Labor Management, Operating Engineers Local 324, talked about the people who can benefit the most from working in the skilled trades. “If you enjoy working outdoors, changing environments and locations, working with your hands, as well as your mind, and creating visual outcomes, then the trades are for you.”

While there are many advantages to apprenticeship programs, you must not forget to prepare for what lies ahead. “Science, technology, engineering and math (STEM) courses are not only good for college entrance, but are also important to enter the trades,” O’Connell says.

MiRoad2Work.org will keep you in the loop of all the latest developments with apprenticeship programs like these to get you started on your journey.

Roughly two years ago, I gathered together a group of union members, non-profit and business representatives and public sector employees to form a partnership. The intent of this partnership was something I hold near and dear to my heart; to find a way to increase the opportunity for Detroit residents to enter the ever-changing field of construction. We needed a new and improved model for workforce development that provided essential pre-apprenticeship training to unemployed adults. Furthermore, we needed a platform to allow interested individuals a clear pathway into construction skilled trades. Today, along with all members of the partnership, I couldn’t be more proud about the launch of MiRoad2Work.org web site. END_OF_DOCUMENT_TOKEN_TO_BE_REPLACED

As one of the great urban centers in the world, we are on the cusp of a transportation revolution in the city of Detroit. The underpinnings of the corporate world have been busy changing the landscape of the city of Detroit for a number of years now. The Illitchs, Gilberts, Penskes, and the likes have been investing in city property for future development. Obviously, these captains of their own industries are keen investors and would not invest in property or buildings if they were not confident that it would be a great return on investment. END_OF_DOCUMENT_TOKEN_TO_BE_REPLACED