The second annual National Apprenticeship Week #NAW2016, made a deep dive into the Metro Detroit region recently, and helped to move the apprenticeship needle from mystery to reality for many people who have never found a pathway into skilled trades. Throughout the week—Nov 14 to 20—a series of events took place that proved to be a huge opportunity for both sides of the employment pipeline: Employers who need to fill hundreds of skilled trades jobs benefited from the creative outreach, and those who can work these jobs learned what is required to be prepared for the challenge.

It marked the progression of a beautiful relationship. 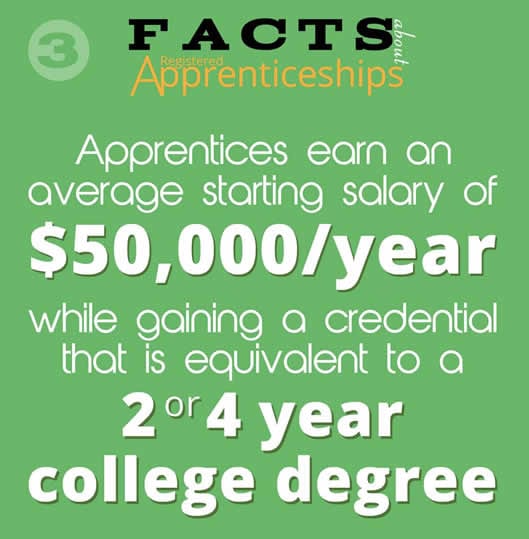 National Apprenticeship Week was started by President Obama to showcase the many training and employment programs that are meeting the needs for a skilled trades workforce, and this year, there were more than 625 events nationwide. Here in Michigan, 28 employers, educators, industry associations, labor, and other partners hosted events to demonstrate how apprenticeships are an attractive career option for those who like to build things and are good with their hands. But, why the big push now?

There are more than 1200 skilled trades job openings throughout Michigan, and the need to fill the employment pipeline with highly trained labor has never been greater. The 2007 economic downturn, an aging workforce and an increase in retirements have created a void that employers are scrambling to fill. In addition, huge infrastructure projects, downtown development and other new ventures like Little Caesars Arena and the Gordie Howe International Bridge require a steady source of carpenters, ironworkers, electricians, cement masons, brick layers, operating engineers, and others to build these structures.

The Partnership for Diversity and Opportunity in Transportation (The Partnership) served as the clearinghouse for NAW locally, promoting a range of events throughout the week on our social media channels and traditional media. We would like to thank everyone who helped to put NAW on the map by contributing their time and expertise, and helping to connect the dots between the people, apprenticeship programs and employment opportunities that currently exist in the skilled trades:

There were so many more activities that took place, but the bottom-line is that National Apprenticeship Week helped to elevate the buzz around #bluecollarlife and #NAW2016. As this region continues to reinvent itself, it is good to know that more Detroiters will be a huge asset in rebuilding the city. One day, these men and woman will point to a structure and proudly say the words that are becoming the D’s newest catchphrase, “I built that.”

Renee Prewitt is President of The Prewitt Group, a strategic communications firm and is a member of The Partnership, the clearinghouse for all 2016 National Apprenticeship Week events. The Partnership sponsors the one-stop website for apprenticeship information and training programs, www.MiRoad2Work.org.